THE CATHOLIC AND NATIONALIST NEWSPAPER - THE IRISH NEWS - TODAY PUBLISHED A SANITISED VERSION OF THE SCANDAL AND STORY SURROUNDING THE ARMAGH PRIEST - FATHER RORY COYLE.

The reason for the sanitised story is the "special relationship" that exists between the Irish News and the Catholic Hierarchy.

Having said that - one could not expect a conservative and family newspaper to publish photos of a priest's naked body.

However I am assured that The Irish News has a full set of photographs and a full transcript of the graphic conversation between Father Coyle and the young Catholic gay man (whom we will call "Eoin") on the gay site GRINDR. 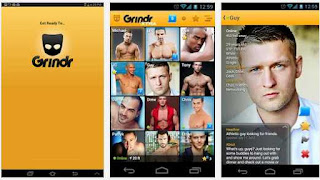 There has been much speculation in Armagh and further afield for over a month now as to the cause of Father Coyle's sudden departure from Armagh Parish and from his role as Master of Ceremonies to the Archbishop of Armagh - Eamon Martin.

Many people were hoping for some reason that Rory had become involved with a woman.

But then the man who was talking to him on Grindr - "Eoin" broke his silence with a email to this Blog. Below is that email:

"I saw your blog post about Fr Rory Coyle.

I can probably tell you why he vanished.

He spoke to me on Grindr a few times and kept wanting to come to my mum's house for sex with me while she was at work.

He sent me lots of naked pics of himself too. When I realised who he was I sent them to a journalist along with the screenshots of his sex chat. Then Fr Coyle's FB was locked up tight as a drum. I assume the journalist contacted the diocese about it cos the next thing Fr Coyle went to ground.

He didn't realise I knew him cos he used to be the school chaplain at XX XXXXX in XXXXXXXXX when I used to go there.

He's just a hypocrite. Denouncing gay people from the pulpit and then shagging guys when no one is looking.

I'd love to know what actually happened if/when the diocese found out what he was up to.

I guess we'll never know what goes on behind closed church doors, though clearly you're well connected enough to know that something was going on.

In the first instance I immediately sent copies of this email to Rory and to Archbishop Martin.

But by that time Eoin had sent all his material to the Irish News.

This is a sad case for Rory and his family.

He cannot really be faulted for being gay or indeed for acting on his attraction - even though some will judge him harshly for breaking his promise of celibacy.

I think he foolish in the extreme to go on Grindr and show himself naked and give out his details and mobile phone number.

But I think the real sadness here is of HYPOCRISY - young priest upholding the Catholic Church's teachings on sexuality on the one hand - and on the other having what seems to be a very adventurous sex life himself.

I think it would have been a bit different if he had simply fallen in love with one man.

I imagine that today a lot of clerics all over will be closing down their Grindr accounts.

The current Catholic priesthood is primarily gay - and that includes some bishops.

Some are active and some are not.

Many are on Grindr.
Posted by Thinking Catholicism at 15:08