LITTLE HITLERS IN KILLALOE AND MAGHERAFELT


LUGS MONAHAN - THE RC BISHOP OF KILLALOE HAS FAILED TO SUPPORT AND HELP THE EX-SEMINARIAN DAVID DYSKY WHO WAS HURT IN MAYNOOTH - ACCORDING TO A KILLALOE PRIEST.

The young Polish/Irish seminarian was sent by Killaloe to Maynooth in September 2017 by Monahan.

During his time there he experienced unwelcome overtures from another seminarian who went on to hurt him badly.

This led him to become very unhappy and ill and forced him to leave Maynooth.

According to the priest Monahan was principally concerned that David Dysky would sue him and the diocese after what happened to him.

David Dysky should sue the boots off Monahan and Killaloe.

It is also alleged that David is having to pay his own medical and counselling bills!

In his short time in Killaloe Monaghan has made himself very unpopular among his priests.

Many priests in fact that have expressed an interest in changing dioceses.

The older ones over 60 are just staying on and trying to ignore Monahan.

It is believed by some priests of the diocese that Monahan is using Killaloe as a staging post for more promotion - to a bigger diocese or an archdiocese.

Apparently he cant kept away from his old diocese of Tuam.

No wonder the Irish Church is in the state its in with people like Monahan being made a bishop!

TO THE LITTLE HITLER IN MAGHERAFELT

Reichsmarschall Gates is at it again upsetting another family in Magherafelt who has just lost their husband and father.

The father and husband was serious ill.

Gates never visited the dying man either at home or in hospital.

The family looked to another priest - their former neighbour -who is a retired Northampton priest living in County Down - Father Eamon Murray.

And even though Father Murray (44) is not in full health - having suffered a heart attack and a stroke - he was able to drive from County Down to visit the dying man in his home.

Furthermore Father Murray went out of his way to visit the dying man when he was admitted to Antrim Area Hospital.

It was the family's wishes that Father Murray celebrate the man's month's mind Mass in Magherafelt next Friday evening.

Now Reichsmarschall Gates has told Father Murray that he forbidding him to celebrate the Mass!!!

But wait until you hear the irrational contradiction of Gates:

Gates himself has had Father Murray celebrate his Masses when he wants to go on holidays.

So Father Murray is good enough to cover Gates' holiday Masses - but not good enough to celebrate the months mind Mass of a neighbour, dear friend and a man he ministered to at home or in hospital.

Gates is a an aggressive and cantankerous little shit.

The people of Magherafelt need rid of him.

But of course the Big Girl's Blouse Amy wont move Gates because he will not be told what to do. 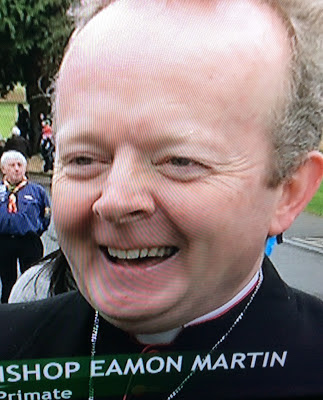 The people of Magherafelt should:

Stop giving Gates and Amy a penny in any of their parish or church collections.

"The higher monkeys climb the more you see of their asses".

Posted by Thinking Catholicism at 23:40